Colours of Japan – The poetry of Fukumi Shimura

“I have received color without limit from the natural world in the years since I entered the dyer’s way. It has poured down on me endlessly, too much for this meager vessel to hold. Joyful as a child with a new set of paints, I have woven and woven yarn dyed by the grasses and trees”.

I don’t know exactly how to start this text. There are so many images, feelings, learnings and inspiration brought by my memories of a trip to Japan! It´s so difficult to decide that I will begin by: Fukumi Shimura, the author of this beautiful phrase above. Even the preparations for my trip to Japan – the result of the prize that I received for the textile work "Cada Passo" – I had never heard of Fukumi Shimura. It was my sensei Hisako Kawakami who introduced her to me. Her eyes sparkled when she told me about her meeting with Shimura sensei. But neither is for less: Fukumi Shimura has been recognized as a Living National Treasure, a title granted by the Japanese government to people who have achieved mastery as artists and artisans. She is a master weaver and a master dyer. Her kimonos are pieces of art. She spins the silk thread, dyes the silk hank with plants, handweaves the threads in traditional looms, creating fabrics for her kimonos that are pure poetry. Alongside her daughter, Yoko Shimura, founded the Ars Shimura school in 2013, with the firm purpose of not only avoiding her art toend, but also teaching her love for nature. 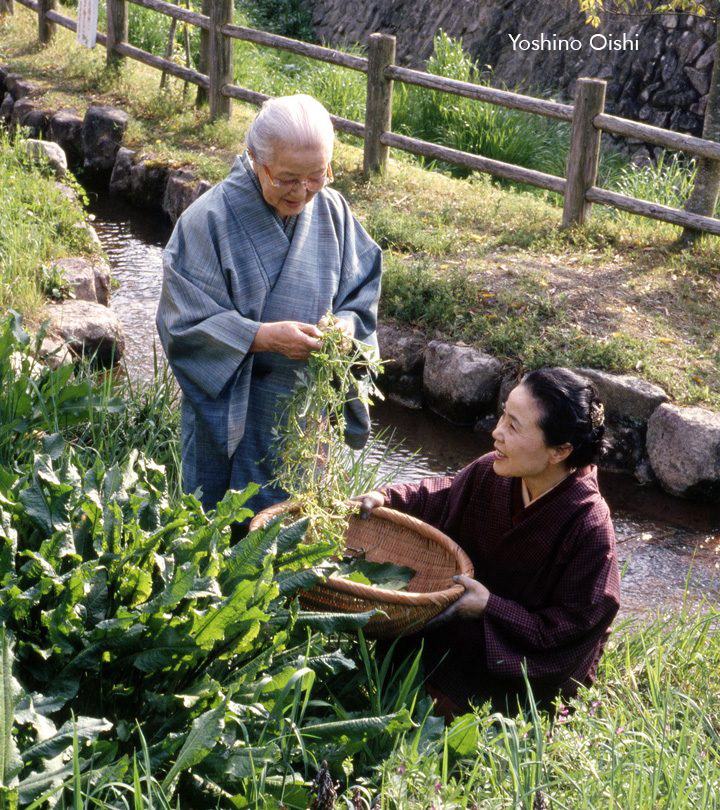 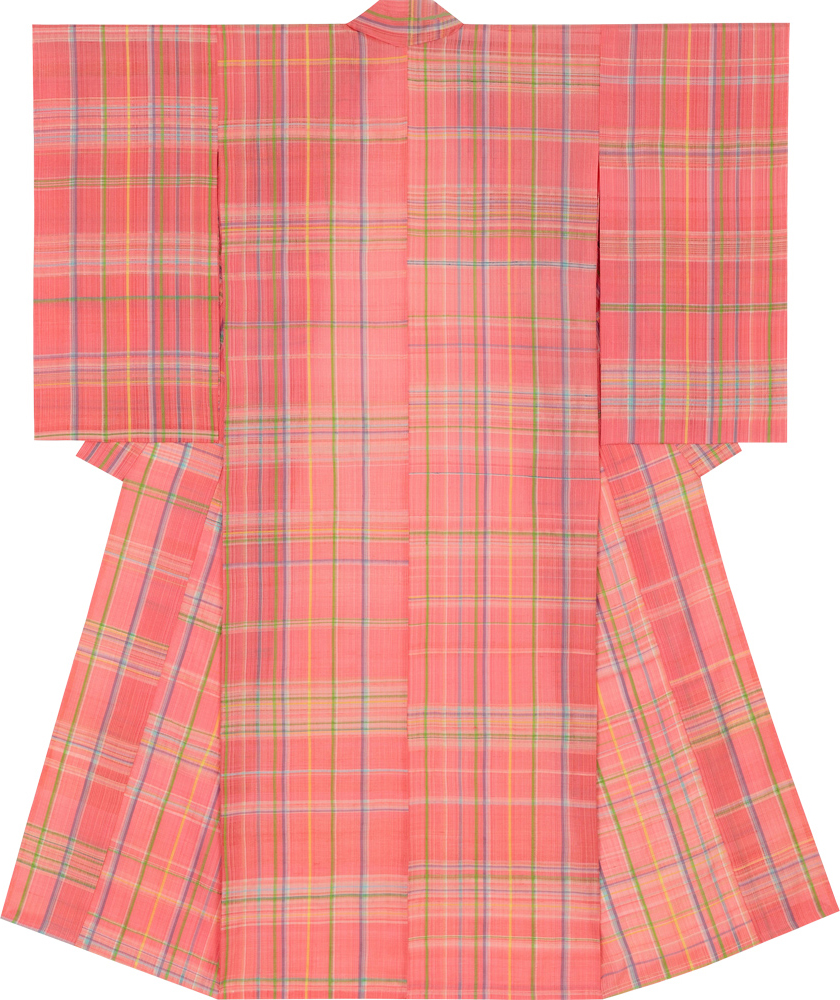 In the fall of 2017, I had the great privilege of visiting the Ars Shimura school in Kyoto, Japan. And on this precisely moment I know I should have started the text with this simple expression: thank you very much! Many thanks to Shoji Shimura san, grandson of Fukumi Shimura sensei, who opened the doors of his school to me, an unknown foreigner. Many thanks to Hikari Sugiura san, Moeko Toyama san and all the students of the school who received me so openheartedly! Thank you so much for so much beauty and inspiration! Now it’s my turn to have a new sparkle in my eyes. Again without words. Nevertheless, I will try to describe this very special meeting as a thank you.

Ars Shimura: a school where you learn to dye with plants, weave with your own hands and respect nature

It was a rainy autumn morning. My husband and I arrived at the Saga-Arashiyama station. We haven't known anything about the place, but we felt it was a very special neighborhood. From the quiet and narrow streets, we saw mountains in the background. On the way, we came across a majestic Buddhist temple that we learned to be the Seiryo-ji. Half blackened, and thinking we were already lost, we ended up in a corner. Peeking under the umbrella, we saw two girls in a window at a house, waving at us as if we were old acquaintances. It was Hikari san and Moeko san. This warm welcome calmed the butterflies in my stomach – the feelings I usually have facing important things.

The school is in a house that looks more like a residence. I was received in a tatami room with two exposed kimonos that made me feel like I was floating. An indescribable emotion electrified my body: am I worthy of such a privilege? Hikari san, one of Fukumi Shimura’s pupils, with her delicacy and willingness to talk in English, told me about Shimura Sensei’s artistic process and how the school works. The school receives 15 students who learn to make their own kimono from cover to cover. For 1 or 2 years, the natural dyeing techniques of the silk thread are taught with the specific colors of each plant and the technique of aizome or indigo dyeing, the blue so special and so Japanese. The students learn to plan the design and colors of the future fabrics that will form the kimono and weave them, through learning the weaving technique called tsumugi-ori. And with great pride, they wear their kimonos at the graduation ceremony.

Thanks to the help of Hikari san and Moeko San, I could feel at a glance what it would be like if I could make my own kimono. They prepared demonstrations for me and I could even receive a special workshop of dyeing. Pure colored pleasure. 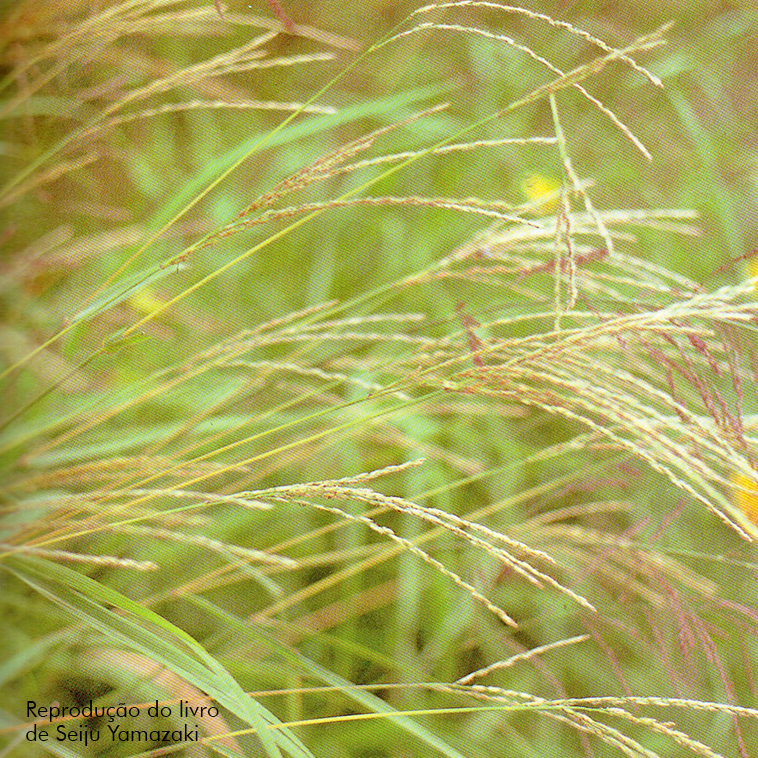 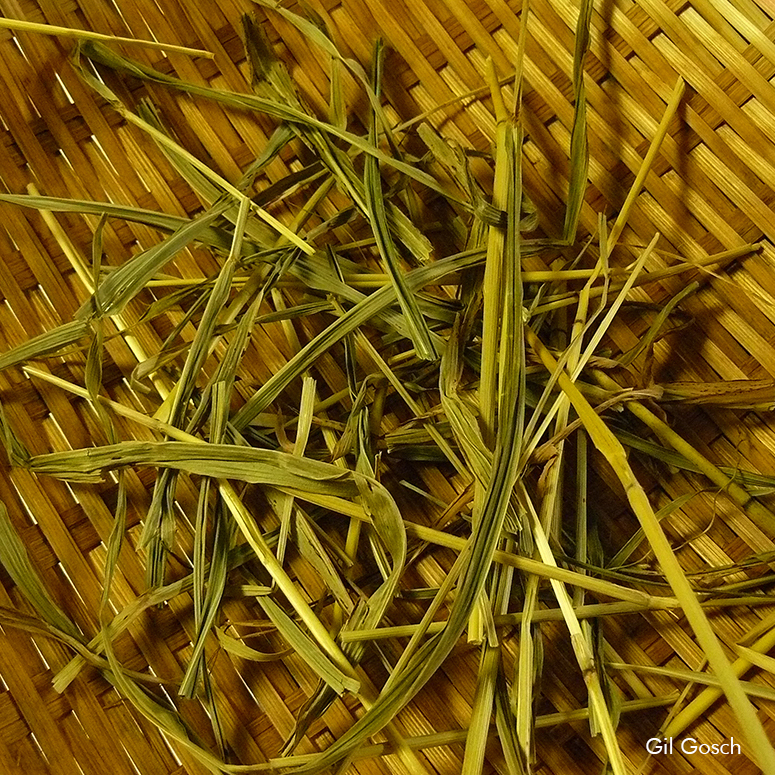 “I don’t tell the acorn or gardenia seed pod or plum bar what color I want – I listen to the voice of the plants.” (Fukumi Shimura)

Moeko san, one of the school teachers, has prepared a nice surprise for me. She led me to the space reserved for yarn dyeing: I would dye my first skein of silk hank with kariyasu! I was as curious and anxious as a child discovering a new world. What a pitty I didn’t speak Japanese... Kariyasu is a plant that dyes yellow. Later I discovered that it is a type of grass, Miscanthus tinctorius, and is very traditional in Japanese dyeing or kusakizome. The images below speak more than my words: 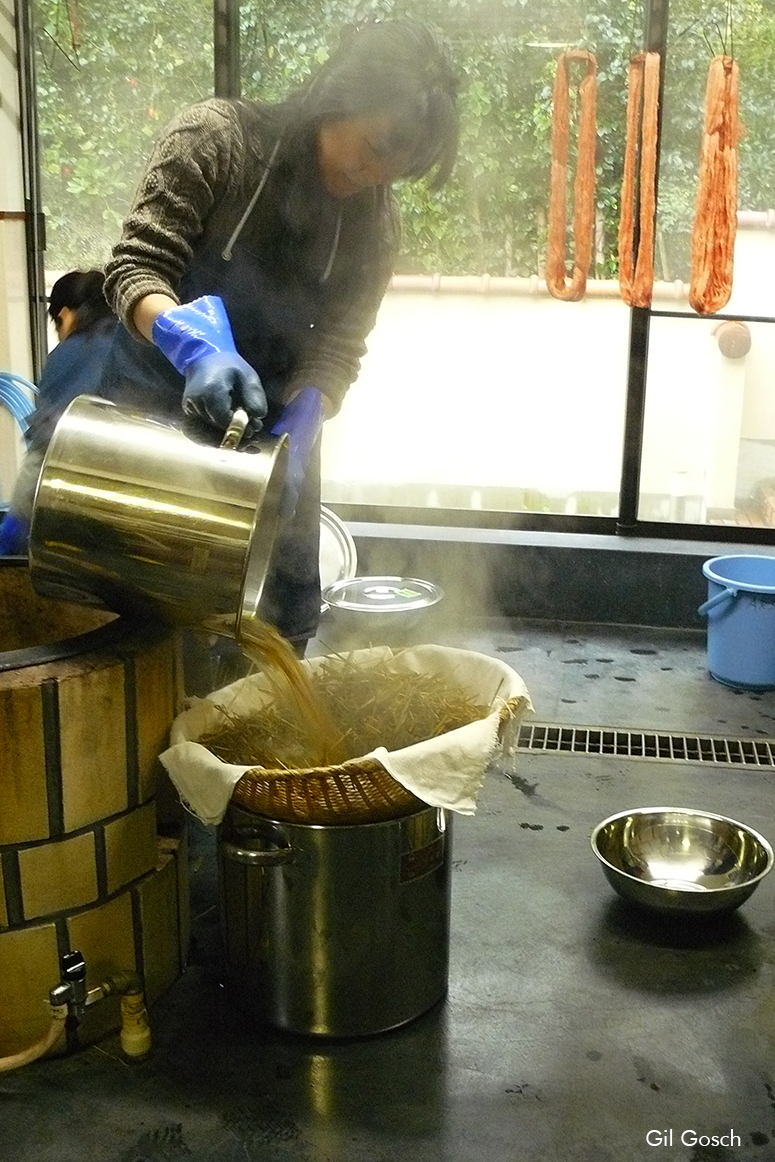 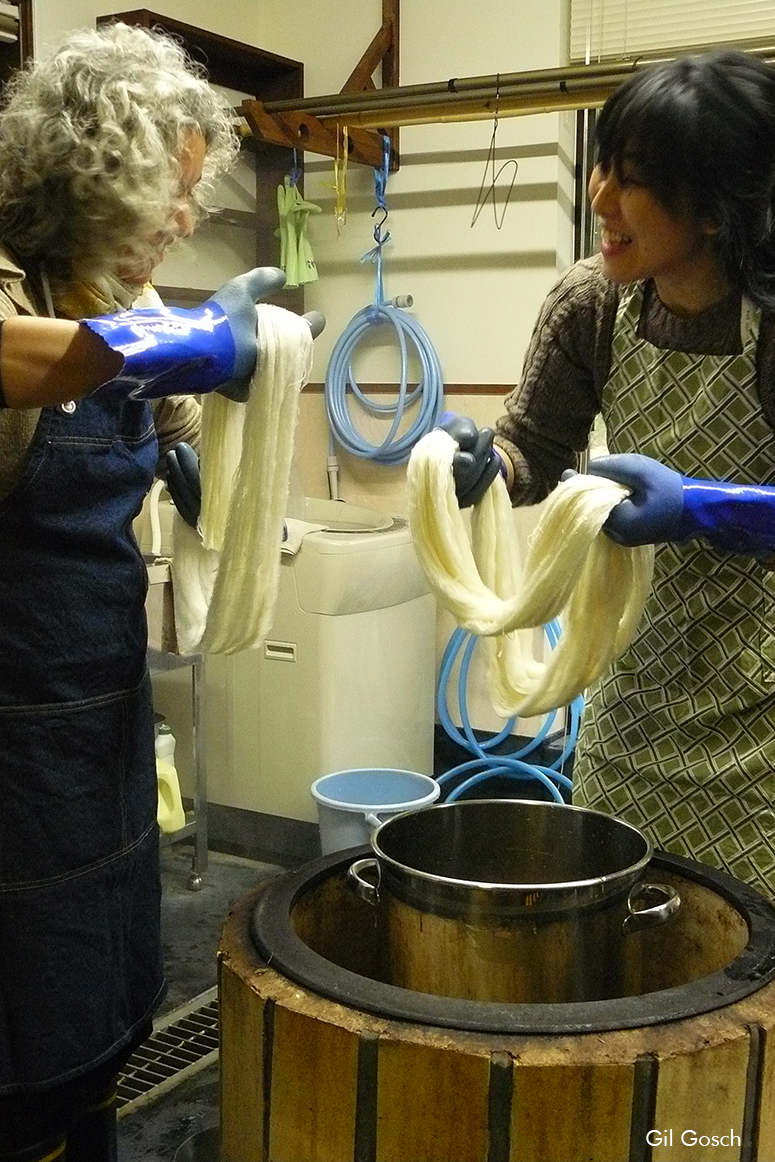 It was blissful. As soon as I dipped the silk hank in kariyasu’s boiling dyeing bath, it immediately absorbed the yellow. A light yellow, clear and pure. Dyed threads, we wash them and hang them to drain for some time.

The silk threads were dyed, but the color was not fixed yet. It´s time for the mordant magic. They use a very traditional mordant in Japan that is water from the ashes of the camellia, probably similar to our decoada. The space reserved for dyeing is open to the garden of the house and from there we can see the camellia bushes that provide the base of this incredible mordant. His liquid is as transparent as water, but as soon as the dyed silk hank are dipped in, it becomes yellowish. And the silk threads? As if by magic, they acquire another tone of yellow, bright as the sun! 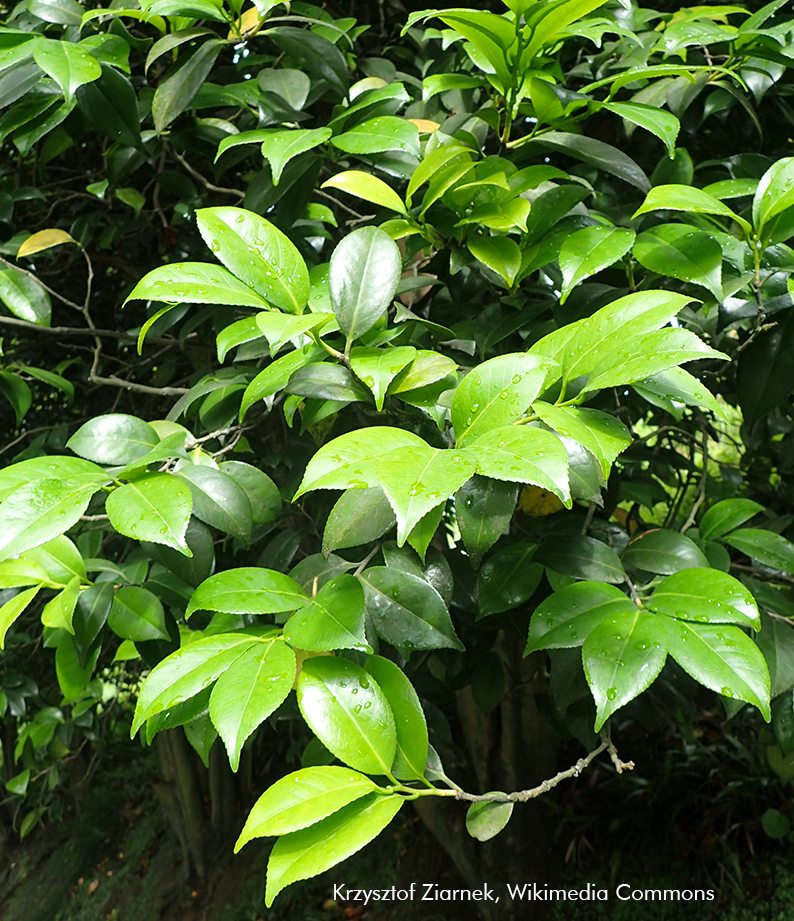 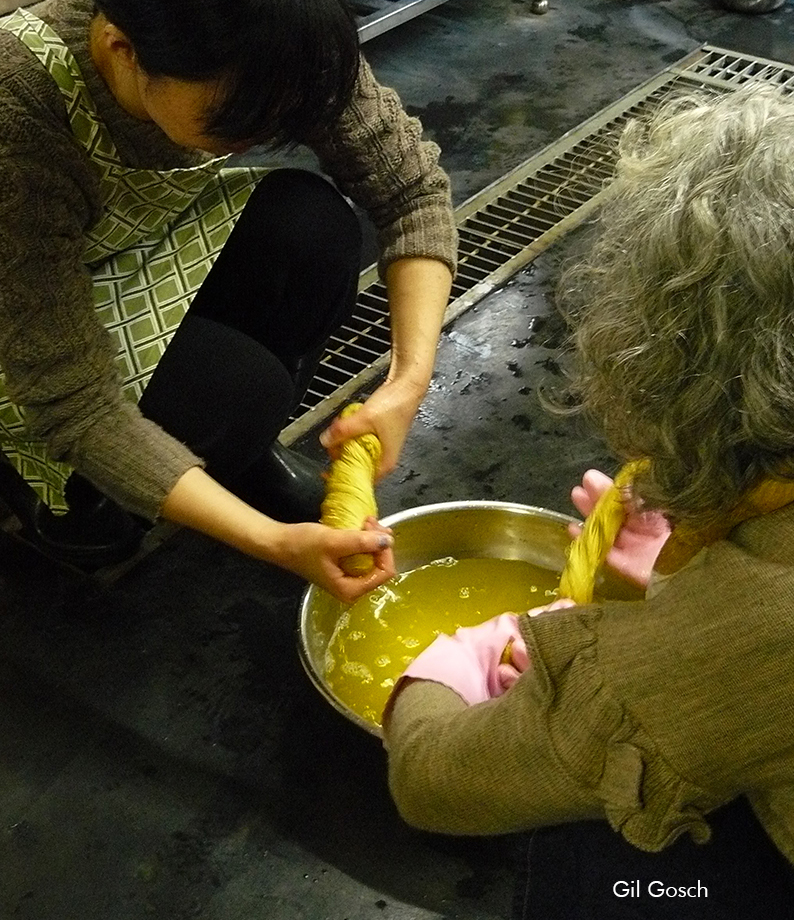 Even nowadays, with much more experience in dyeing, when I stop to concatenate ideas and write, I am amazed. I really agree with the words of Shimura sensei: the plants present us all the time. They give us the color and the substance that fixes the color. And all without asking for anything in return.

"Working with indigo has no limit and it is endless. This work is going to exist as long as human beings are here. It is the colour of the rise of life." (Fukumi Shimura)

The blue infinity of the sky and the sea can be contained within a huge clay pot. Or rather two. That’s how I felt when I witnessed the indigo dyeing demonstration. We were led into a special room, prepared to house the two clay pots filled with the mysterious blue liquid. On a small shelf, an altar rests. Simple and clear, the altar is there to venerate the blue Kami, a deity like so many others in the Shinto pantheon that protects the aizome, or indigo dyeing. First of all, we pray in the Shinto way to invoke the blue Kami. Now the demonstration can started: 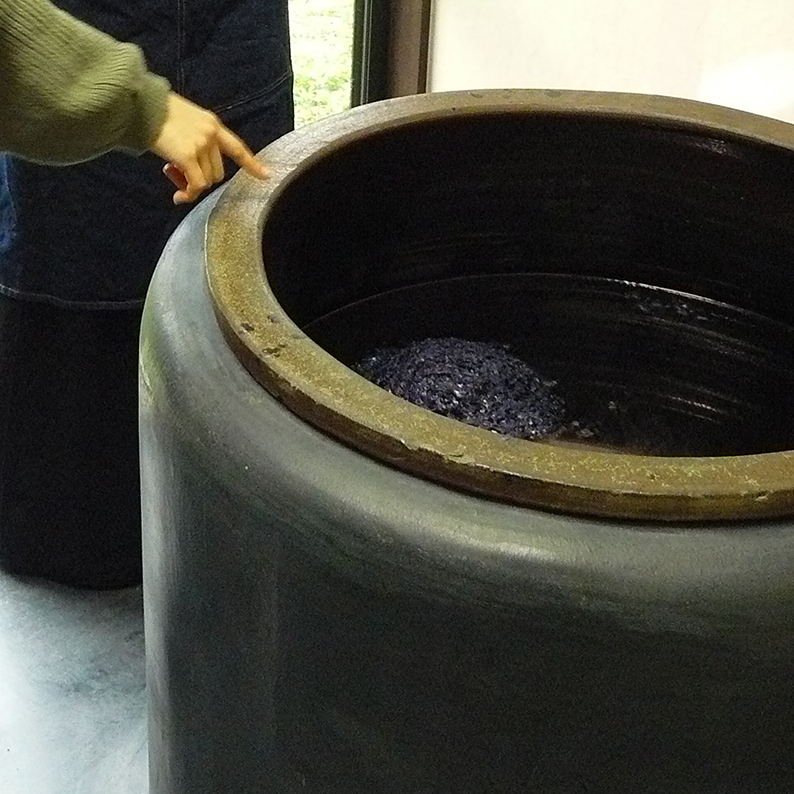 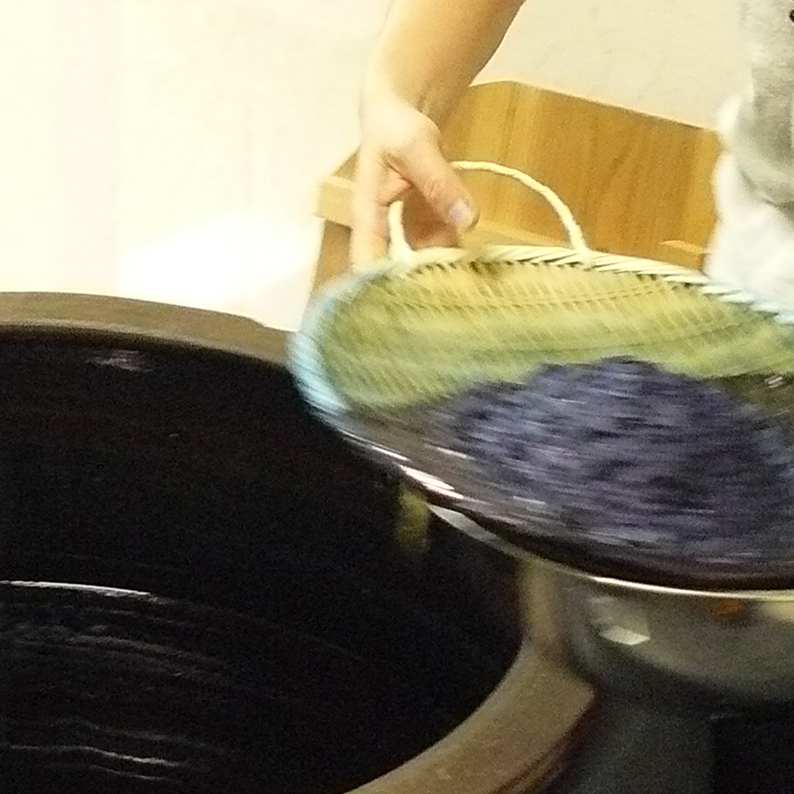 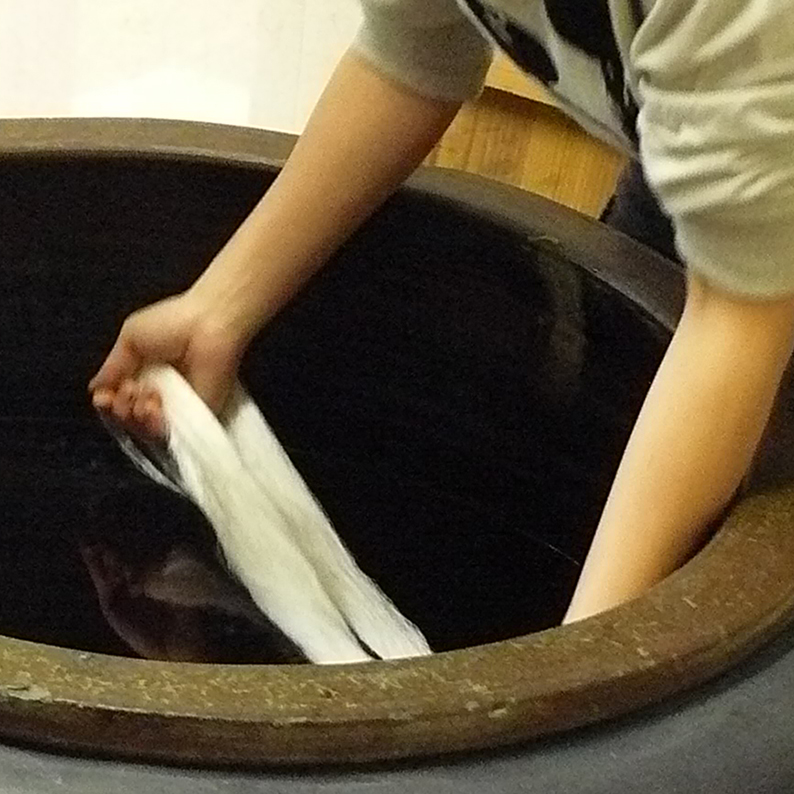 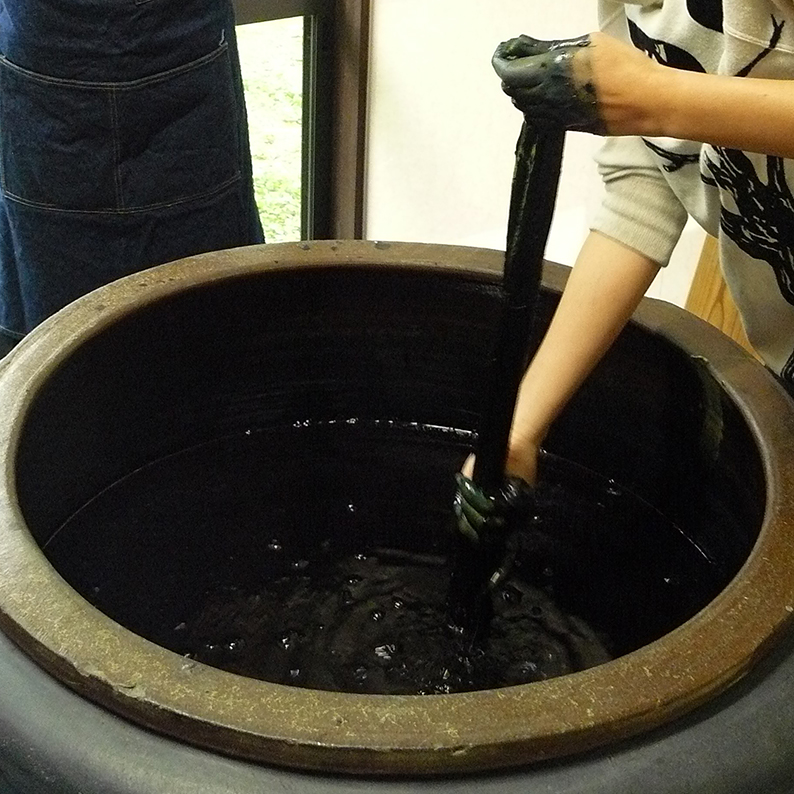 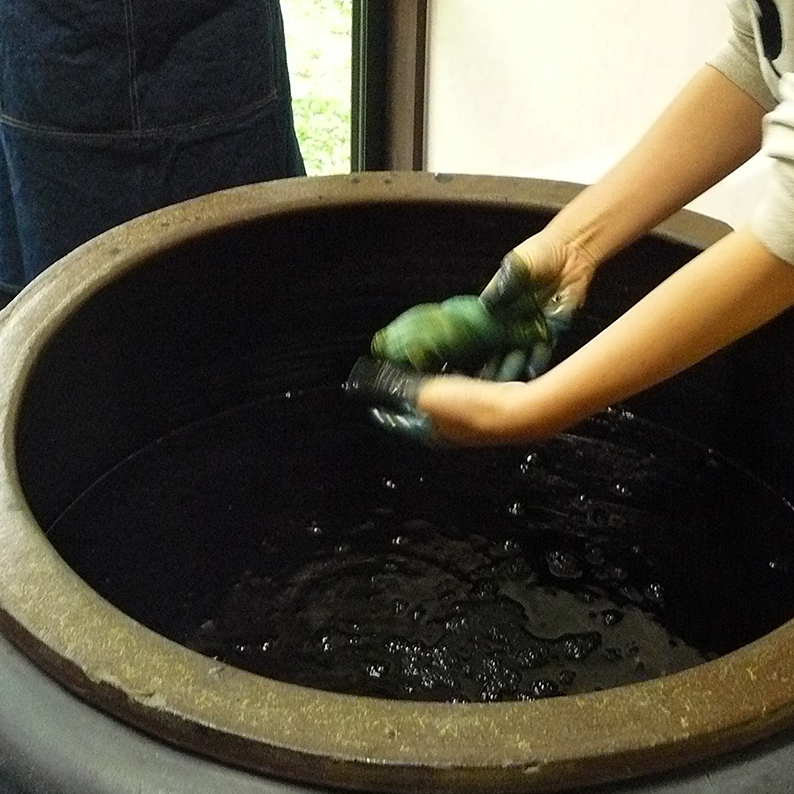 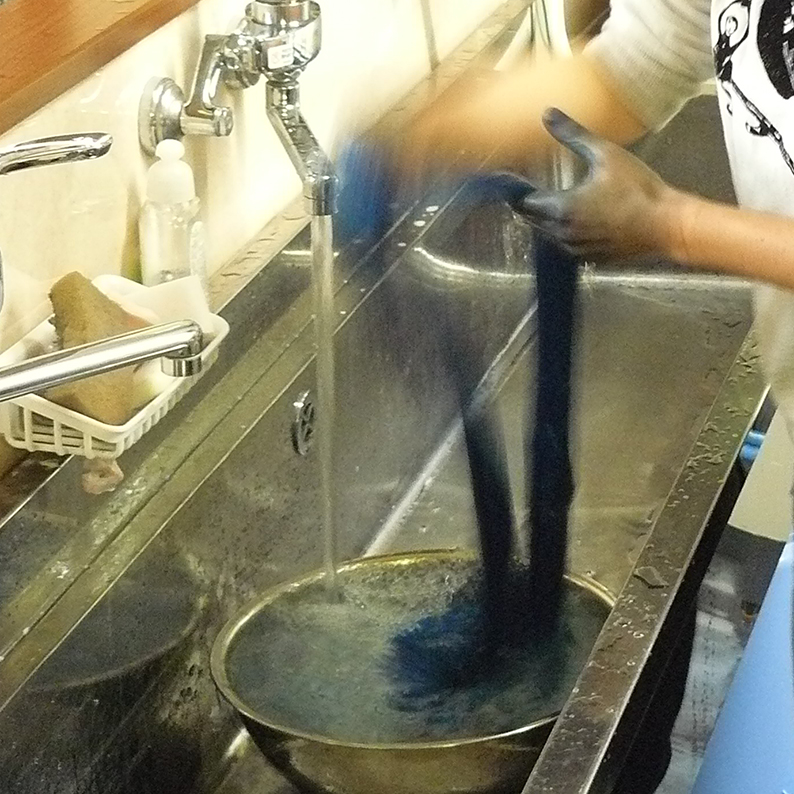 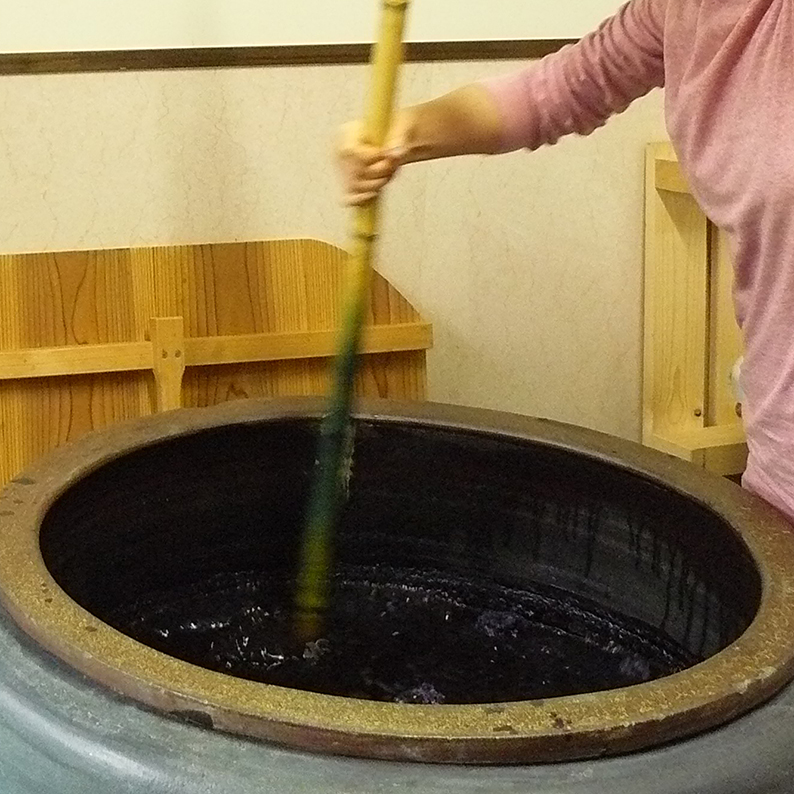 After dyeing, the threads are opened into the air and rinsed thoroughly in running water. The indigo baths are stirred every day, care needed to keep them alive at all times. Indigo dyeing is a very complex process that requires a lot of knowledge and several stages of fermentation. Quite different from the regular process of plants dyeing that basically some parts of the plant are boiled in water. But this will give subject to many other posts. The important thing now is to dive into this deep blue that is also offered to us by a plant: Persicaria tinctoria.

"The life of our textiles depends on colours which are the bounty of the earth. Colours start telling stories as we deepen them and searching for the best combinations of them. Our wish is to weave those various stories into one common dream." (Shimuranoiro.com)

And so we proceed to the other stage of the process: the tsumugi-ori weaving. On the upper floor of the school, 15 weaving looms line up. From here come the fabrics that will be used in kimonos.

“Originally, tsumugi-ori were woven with thread spun from waste silk. They were the daily wear of silk farmers and other common people. At on time, tsumugi-ori were typified by plain weaving and simplicity of style. But more recently, textile artists have taken tsumugi-ori to exciting new places in terms of coloration and design. One such artist is Shimura Fukumi.” (excerpt from the folder of the movie "Tsumugi-ori: the art of SHIMURA Fukumi").

It is here that the Ars Shimura school does not let the tsumugi-ori technique die, teaching it to the next generations: 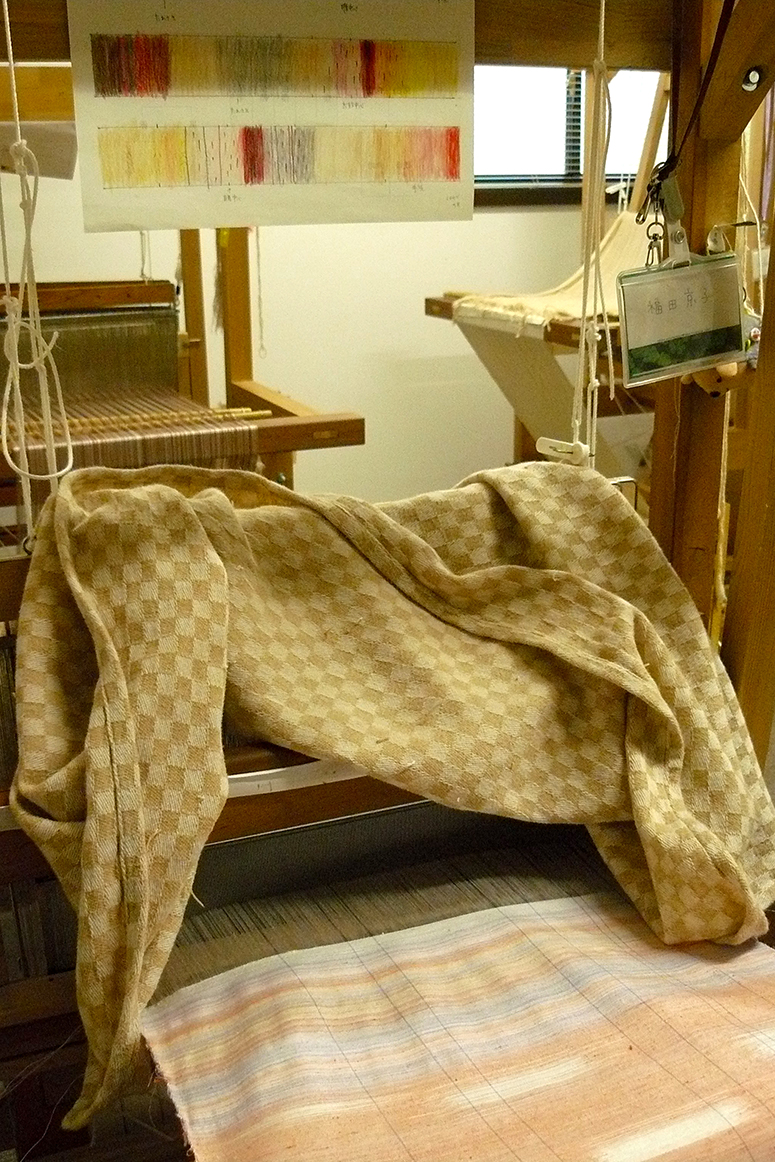 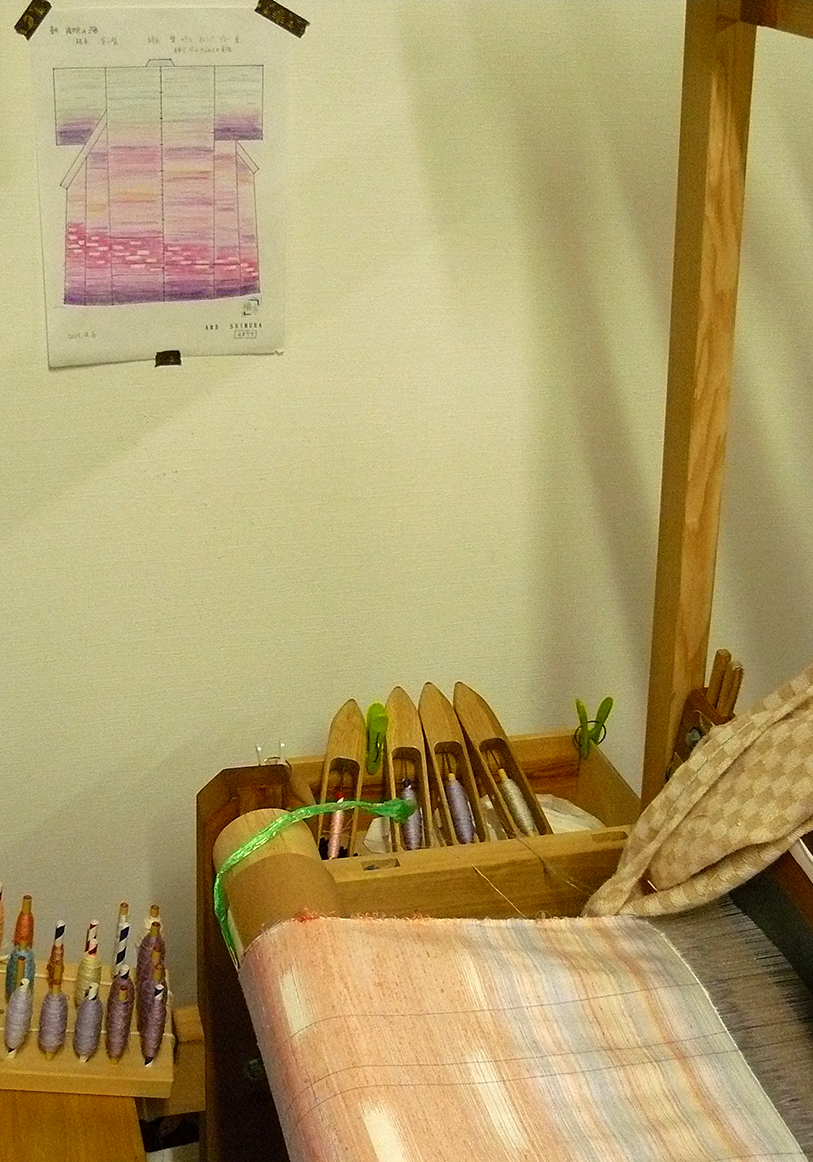 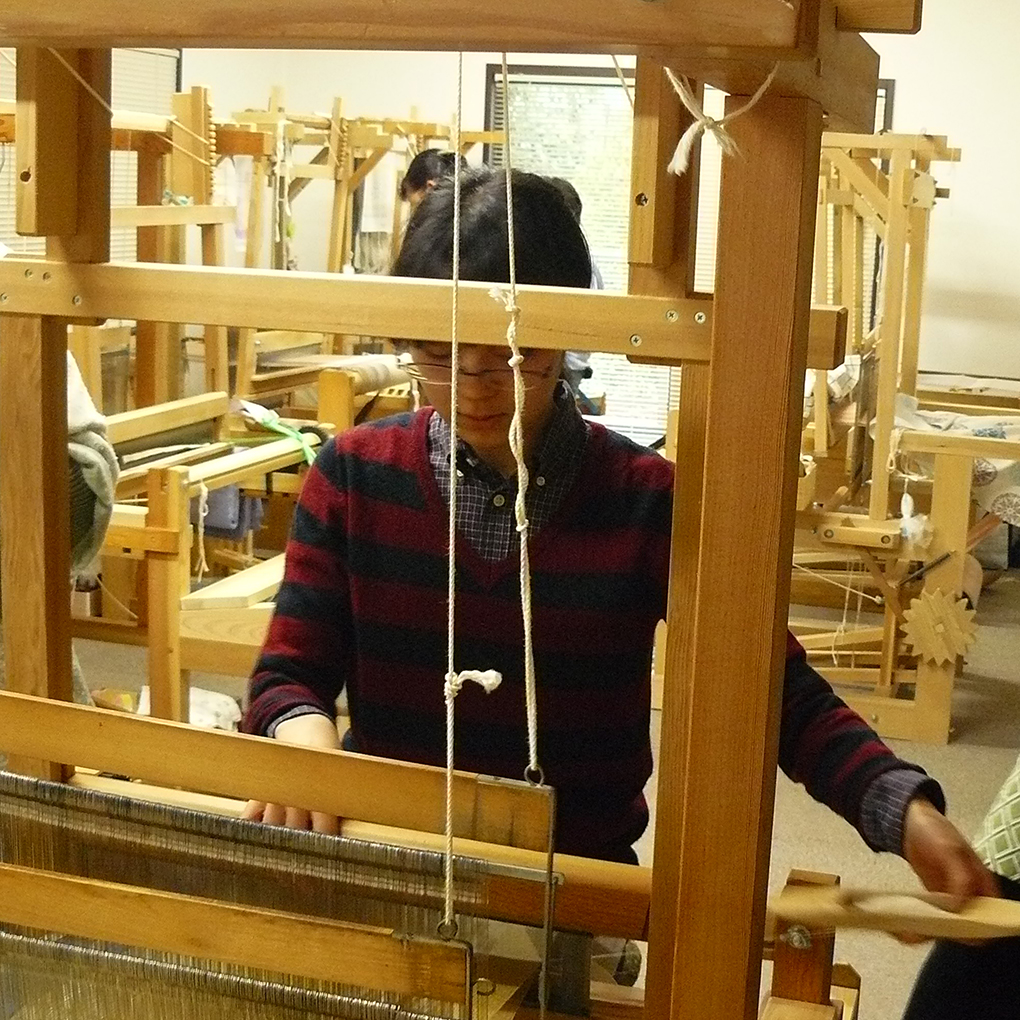 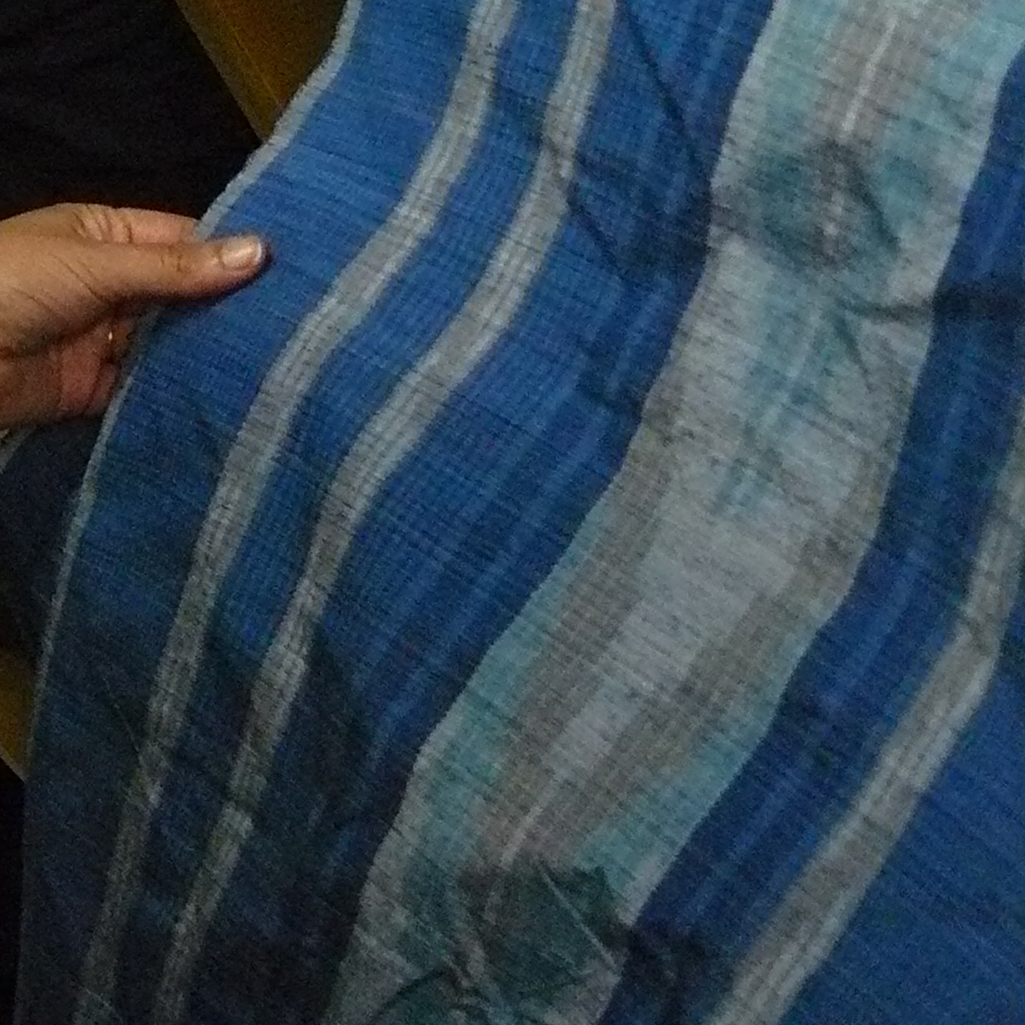 Poetry of the colours

I still find it very difficult to find words to define the work of Fukumi Shimura. She manages to combine mastery in making, modernity, tradition, respect, inspiration, poetry. All that founds the soul of Japanese culture. The movie above - "Philosophy of Tsumugi: The World of Fukumi Shimura" – perhaps shows better in dazzling images that escapes me in words.

I finish the text with the words of this amazing artist:

“Plants provide us with the splendid colours that they possess for nothing in return, and those colours are actually different forms of light, so they have lives of their own. This made me realize how wonderful and noble plants truly are. Humans take advantage of nature and arbitrarily destroy our natural surroundings by cutting down trees, polluting the oceans, and contaminating nature with the terrible power of nuclear radiation. Nevertheless, plants continue to provide us with an infinite array of colours. This had a profound impression on me and would drive me to pursue my current vocation.” (Fukumi Shimura)

This is the first post in the "Colors of Japan" series, a travel diary retelling my experience visiting Japanese artists who work with traditional techiniques of natural dyeing and weaving. A way to reciprocate, thank you, and share so many beautiful experiences that I learned there.

Discover the products of the online store dyed by hand with plants and herbs: 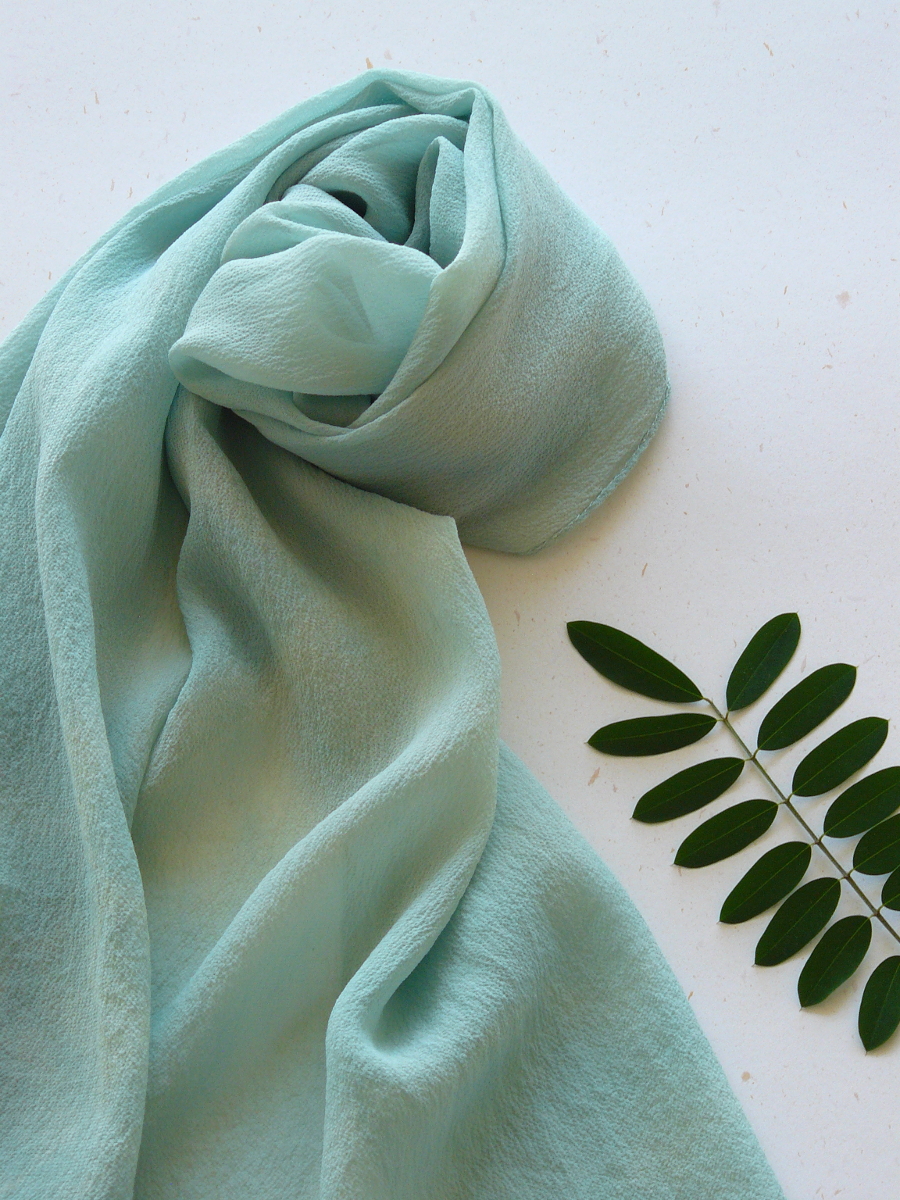 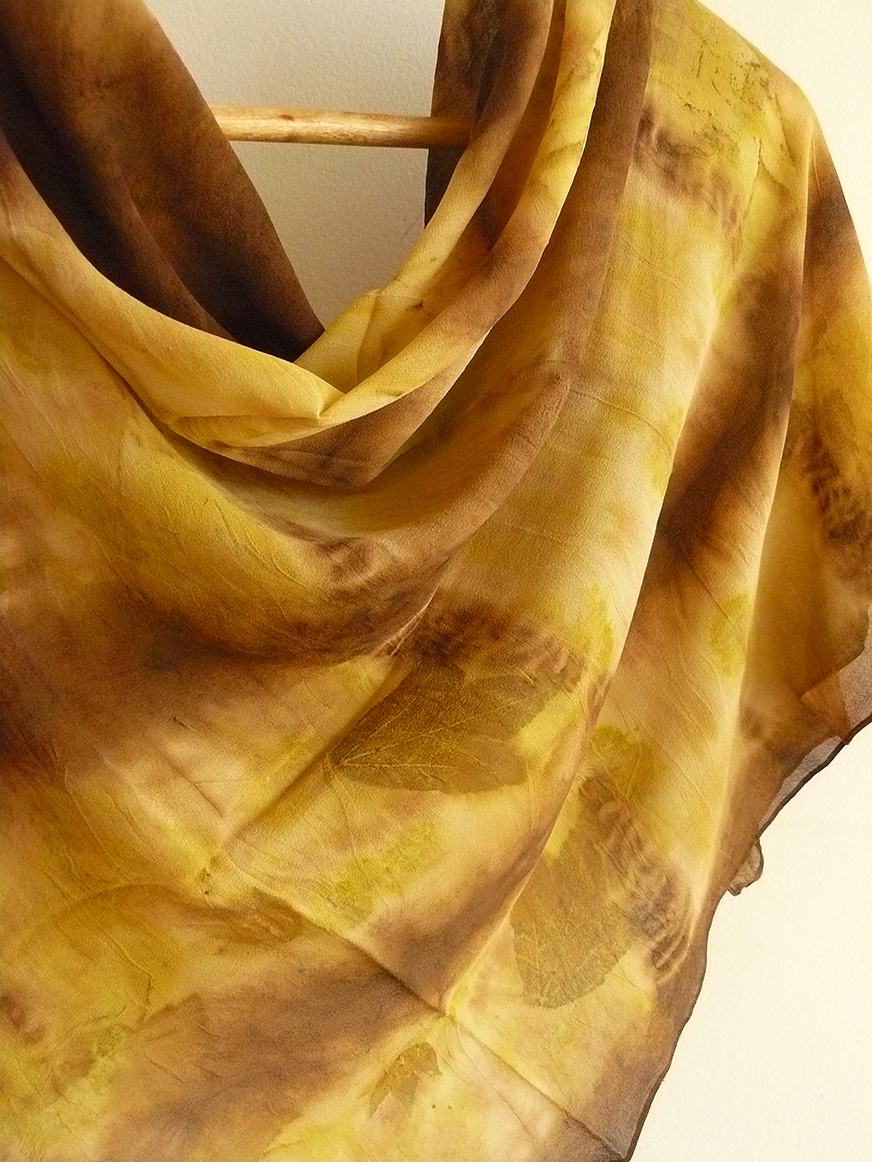